FEAR - A PROTECTION OF EGO IDENTITY

In Sri Ramana's teachings there is a clear water divide between the absolute Self and the mind.

All mental forces are like a house of cards that support each other forming a kind of mental balance. In the center of the mind there is that which is called ego, a supposed entity like a prison guard checking all prisoners, the thoughts. The ego is formed during our whole life and acts or rather re-acts from memory coming from pleasant or unpleasant occurrences.When the manipulating and controlling power of the ego does not hold, the  so-called 'balance' of the person is believed to be in danger.

Here the practical aspects of Bhagavan's teachings have their starting point. If this center starts to observe instead of to manipulate, if we are aware of all objects including foremost all mental objects, the mind settles down. Mostly it will be a pleasant relaxing experience - as long as the ego doesn't feel threatened regarding its imagined independency and dominance. 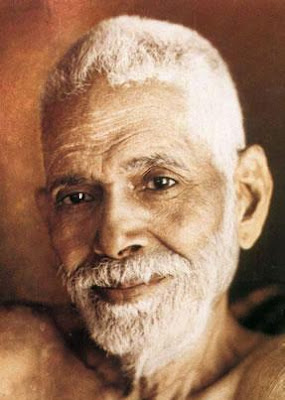 If memories or emotions rise that are painful or cause fear, anger, dullness or similar emotions, the ego-mind, the will-power, will start to react as it always does. It will try to evade, or overcome or fight them. The meditator will want to get up and do something else to not feel them. Or he or she will project these emotions on someone or something outside and try to fight them in that relationship.

This is the start of the 'second class' in spiritual training. All those that merely want to enjoy some relaxation will break off, while those that have a genuine yearning for Truth will develop strength and persistence. Also those that are still stuck in the first class and merely want to enjoy some devotional feelings will be left behind at this point. They may not be clear that all devotional feelings are as fleeting as all else.

In that case the mind has won and kept its ego-'balance', shielding the awareness from unpleasant feelings.

If there is greater intuition of the preciousness of true silence and its peace, perhaps after many break-ups like described before, the courage to stay on will grow. Because true silence is not afraid, it even grows when challenged like that. In as much it is aware of its spaciousness it has also room for all kinds of mental activities and finds more and more freedom in this true equanimity.

Still, the ego may not give in and bring even deeper issues, stronger fears for instance. If the enquiry is kept up, the awareness can be discriminated from all of them:

This makes it clear immediately that we are only looking at something, the awareness itself can never be an object of perception, whatever it may be, a physical tension, an emotion, a memory etc.

In the story of Buddha's enlightenment the devil, Mara, always the essence of ego, of duality - in the Christian Symbolism therefore with two horns - tempts this power of equanimity through sending his beautiful daughters. The Buddha to be tapped the earth as a sign of his solidity and could not be moved. After this the final enlightenment experience opened up.

In the famous death experience of Sri Ramana the fear of death stood out prominently, but the power of his insight and the surrender to the Self was much too strong and so he went beyond the realm of death once for all.

Concluding we can summarize that all emotions are testing our maturity. As long as we re-act we are caught in the old and learned patterns. In as much as we can remain as awareness by all means, the power of the emotional mind gives way for the Self.

(By all means: we may later discuss many possible ways of assisting the development.)

There was immediately a chorus of questions by a few others.

Sri Maharshi continued: Yes, all kinds of thoughts arise in meditation. It is but right. What lies hidden in you is brought out. Unless they rise up how can they be destroyed? They therefore rise up spontaneously in order to be extinguished in due course, thus to strengthen the mind.
- Talks 310