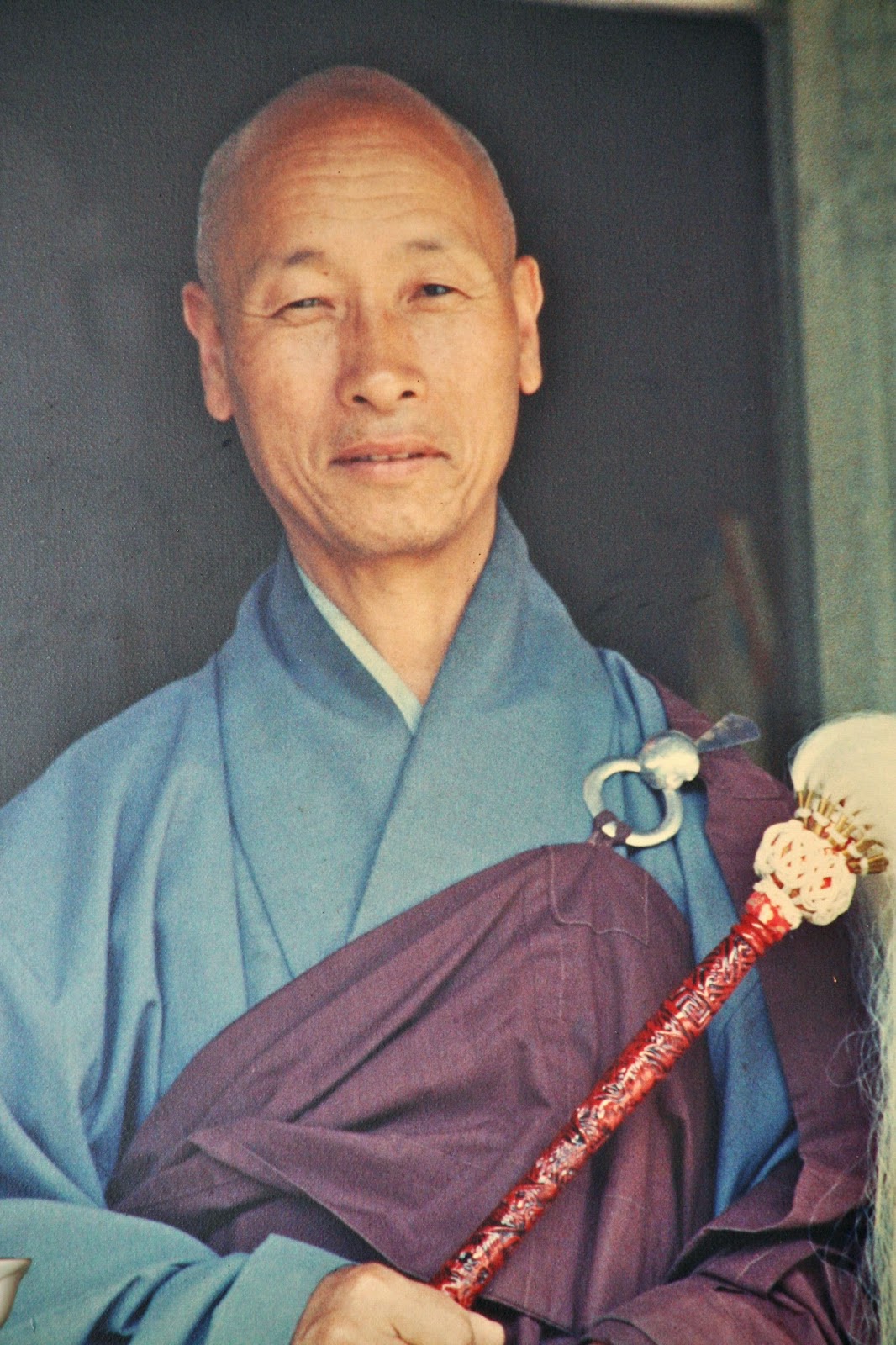 While on a pilgrimage Kusan promised to a dying fellow monk named Popch’un Sunim to assist him after death to find liberation through his own enlightenment.

“I went to stay in a small cabin behind the hermitage.
A young monk brought me my morning and noon meals, since I intended to practice without going down to the main hermitage. However, since I had been so busy, much of the concentration I had developed through my previous
hard practice had dissipated. When I sat, I often dozed, and the practice did not go well. This went on for two
days, leaving me with only six days within which to awaken
in order to ferry Popch'un Sunim across by the ceremony
day.

With so little time left, I could not continue with such
poor practice. I decided to do standing on the toes meditation. So, with the palms of my hands together, I meditated standing on my toes. By meditating in this way,
drowsiness could not interrupt me as it had before. For
days and nights I stood like this. I would only sit to eat my meals when they were brought. Then, once again, with my palms together, I would resume the meditation standing on my toes. In such standing meditation the hardest part is to get over the first two hours. After this, the main difficulties are overcome. Whether sitting, lying, or standing, one s meditation continues unaffected as soon as the mind is settled in concentration. Consequently, I felt neither tiredness nor pain in my legs as I was pursuing this practice.

On the day of the memorial ceremony, around three o'clock in the afternoon, the spirit of Popch’ un Sunim appeared to me. He was wearing a traditional hat, holding a wooden staff and carrying a monk's knapsack on his back. He said, “I came to visit you as it is the forty-ninth day."
I just continued practicing.
Even though it was the forty-ninth day, I did not
go down for the ceremony. As I had not been able to awaken, what would have been the use of going? The monks there performed the ceremony, but I just continued meditating.

On the seventh day of this standing meditation, as it was approaching nine o'clock, the clock made a loud click before striking the hour. Upon hearing that click “One thought turned back." On that occasion I chanted following stanza:

“One single sound: the three thousand worlds are swallowed up.

The ticking of the clock is but the all-embracing exposition of the teaching.

Piece by piece the metal and the wood are but the pure Dharma body.”

This was one time when I put effort into my practice in order to ferry a friend across.

Such intense standing practice served to remove the obstructions caused by torpor and restlessness. The effect was
like the experience of a clear sky completely free of clouds.
It instantaneously allowed me to enter and abide at the original place. Thus I was enabled to pass over a very
difficult step. You can only do such continuous standing meditation with the thought, "It doesn't matter it I die.”

It takes much more than just a feeble effort to endure such
practice for seven days. But if you try with a sense of great urgency, then awakening comes about quickly. There are no fixed rules saying that you must spend many decades
before awakening. If you raise a strong resolve and persevere with great effort, the practice will rapidly progress.
If you put little effort into the practice without any sense of urgency, awakening will take immeasurable aeons.
Posted by Reinhard Jung at 01:13 2 comments: Links to this post

ONLY BE AWARE AND YOUR BEING IS CLEAR IN YOUR AWARENESS

No one can deny his own being. Being is knowledge, i.e., awareness. That awareness implies absence of ignorance.
And yet why should he suffer? Because he thinks he is this or that. That is wrong. “I am” alone is; and not “I am so and so”, or “I am such and such”. When existence is absolute it is right; when it is particularized it is wrong.That is the whole truth.
Does he require a mirror to reveal his own being now? Only be aware, and your being is clear in your awareness.
D.: How is one to know the Self?
M.: “Knowing the Self” means “Being the Self”. Can you say that you do not know the Self? Though you cannot see your own eyes and though not provided with a mirror to look in, do you deny the existence of your eyes? Similarly, you are aware of the Self even though the Self is not objectified. Or, do you deny your Self because it is not objectified? When you say “I cannot know the Self” it means absence in terms of relative knowledge, because you have been so accustomed to relative knowledge that you identify yourself with it. Such wrong identity has forged the difficulty of not knowing the obvious Self because it cannot be objectified; and you ask. “How is one to know the Self?”
Your duty is to be: and not to be this or that. “I AM that I AM” sums up the whole truth. The method is summed up in “BE STILL”.
From Talk 363 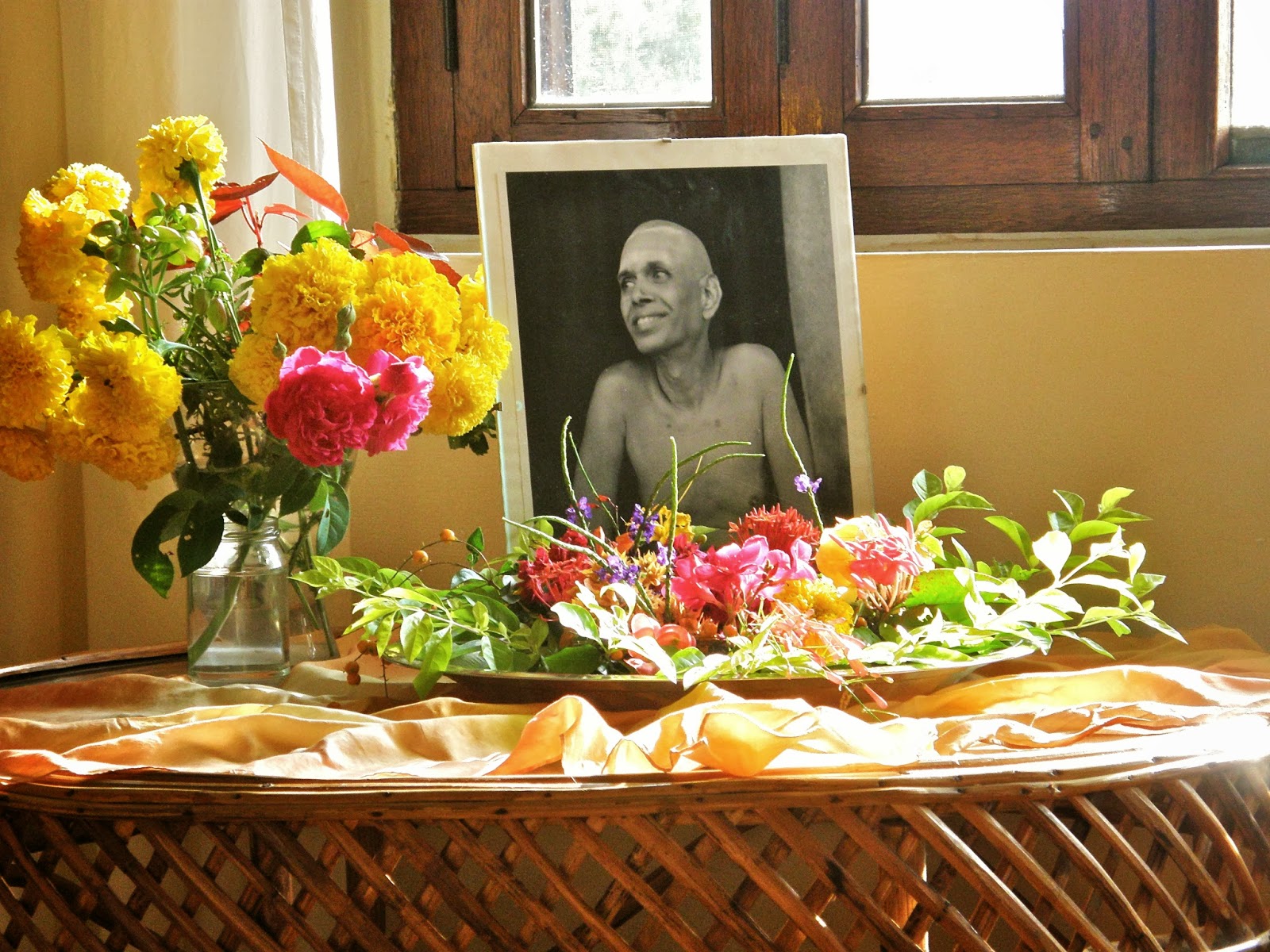 Posted by Reinhard Jung at 05:25 2 comments: Links to this post